In June of 1964 annual conference was held in Burlington, North Carolina.  It was there that the late

Bishop Paul Garber announced that due to the expected population increase in and around Garner, a new Methodist church would be built.  Bishop Garber appointed Reverend William D. Sabiston, III as the new minister.   Reverend Sabiston and his family moved into the new church parsonage at 201 Winterlochen Road which was purchased by the North Carolina Board of missions.

On January 10, 1965 Saint Andrews held its organizational service in the Fred A. Smith cafeteria.  Presiding ministers were Reverend Sabiston, the late Bishop Garber, and the late Reverend Nicholas Grant. Over 200 attended the service and 65 charter members were received into the church.  During the following months our membership continued to grow. 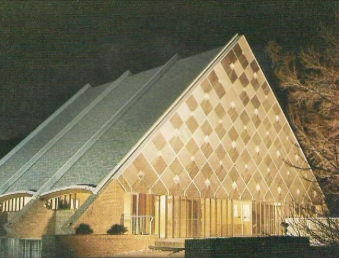 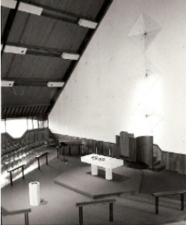 Saint Andrews continued holding services for two more years at Fred A. Smith and on February 11, 1968 ground breaking service swere held on the purchased land with approximately 300 in attendance.  Construction began and nineteen months later on August 7, 1969 our original church building was consecrated.

In the years that followed our membership continued to grow and in early 1986 a charge conference was held and the church voted to add on to our existing church. 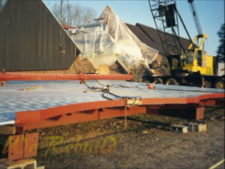 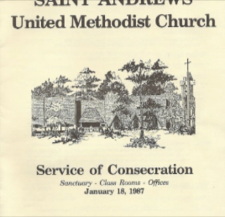 On March 6, 1986 ground breaking services were held and ten months later on January 18, 1987 our new building was consecrated.

In 1995 our Stephen's Ministry and Mother's Morning Out programs were started.

In September 1996 our church building suffered major damage from Fran.

We have been blessed by many pastors since that first church service in November of 1964: